6. Two Geishas behind the dawn of modern Japan

Two Geishas behind the dawn of modern Japan

The Meiji Restoration in the mid 19th century was when Japan’s whole social structure and policy were dramatically renovated and reformed toward a westernized modern state under the Meiji Emperor for the first time in Asia. 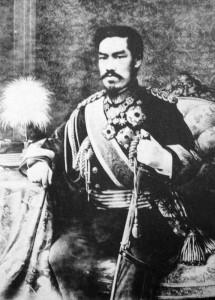 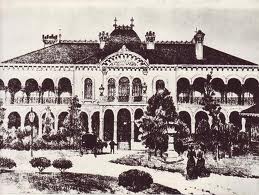 Before the Meiji Restoration, feudal Edo shogunate government ruled from Tokyo for more than 250 years. At the end of Edo period, confrontation   between the royalist party and the shogunate party occurred over a battle of power triggered by whether or not to open the country for trade with foreign countries. After about 6 years of disorder, the Royalists finally won.

In that period in Japan, people often used exclusive restaurants when they needed to have confidential talks for plotting the overthrow of the shogunate, where enemies of enemies became friends.

Geisha girls were invited to entertain their customers with sophisticated conversation, singing, dancing and playing musical instruments in such high-class restaurants. They knew their role well and also how to maneuver in delicate and sometimes dangerous situations. There was a strong vow of secrecy among Geishas because they who assisted the men were risking their lives as well. The Geisha houses at that time were filled by daughters sold mostly from poor farmers who could not afford enough food for their children. They did not have anywhere else to stay but Geisha houses so they strove to improve their performance and entertainment skills for their survival. 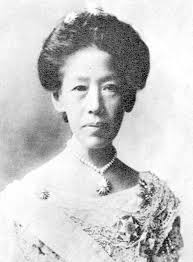 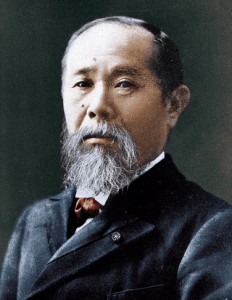 The first Prime Minister of Japan, Hirobumi Ito and his wife Umeko

One samurai named Hirobumi Ito fell in love and married a Geisha named Umeko. He later became the first Prime Minister of Japan and introduced the first constitutional policy to Japan and Asia. Umeko studied diligently to learn how to read and write and become an educated politician’s wife. Her handwriting looked like an art form and she learned Japanese chess, English and poetry writing. People around her worried about her health because of her devotion to learning. 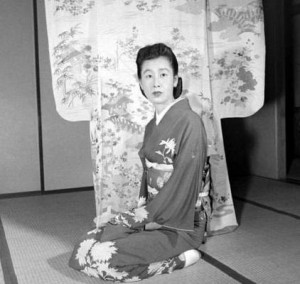 At the end of Edo period, Japan was forced at cannon point to sign a Treaty to trade with America and other foreign countries. In Japanese, it’s called the Unfair Treaty. Ito wanted to amend the Treaty to make it more equal for Japan. They built a western style building called Rokumeikan and held a formal event to entertain the foreign diplomats. The women wore western style dresses and had to dance with the male guests, which was against Japanese custom. Ito’s wife persuaded the other wives to join in the dancing by holding a dancing class. She hosted the party and supported her husband as First Lady. 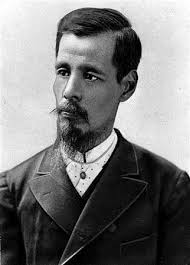 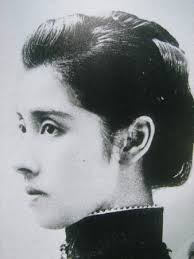 The 8th foreign minister of Japan, Munemitsu Mutsu and his wife Ryoko

Munemitsu Mutsu, a foreign minister of Ito’s second cabinet also married a Geisha girl named Ryoko. He met her soon after his first wife had passed away and he quickly fell in love with her. She came from a very poor samurai family whose father had lost his job because of big change in the whole social system of the nation. She never forgot her heritage even after she was sold to a Geisha house. She always behaved herself as the daughter of a samurai.

Four years after they married, Munemitsu was arrested and spent five years in jail for treason. Ryoko brought up his three children alone, left by Munemitsu’s first wife. She visited him with photos of his children and her dressed very beautifully to ease his worry. He was released from prison and went into politics with the help of Mr. Ito. He was sent to Europe to study abroad for two years. Ryoko was left alone again with his three children. Munemitsu frequently sent letters to Ryoko from Europe. He asked her to read current events in the newspaper everyday. It was uncommon for housewives to do such things at that time in Japan. She followed his wishes. 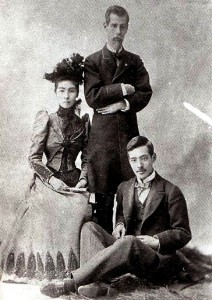 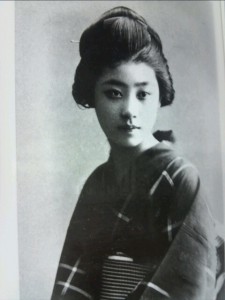 When he returned from Europe, he went to Washington as the Japanese envoy with his wife. Ryoko’s manners at the formal events were highly commended by diplomats in Washington. Munemitsu was successful in rectifying the unequal treaty with America and four other European countries. Historians view Munemitsu’s success as a diplomat with high regard to Ryoko’s support.

Both of those successful women were Geisha and brought their social skills in to the political arena and helped internationalize Japan. The shogunate system fell and the Emperor was returned to power and a western system began its expansion.

The strong will of these women from that period resemble the “never give up” attitude of modern day Olympiads. Throughout their lives, they carried the stigma of their past into high society but they exceed beyond the criticism and achieved true greatness.